This is a question that has been floating around my head for quite some time now, so I thought I’d explain what I mean before I open the topic up to all of you, my lovely and consistently insightful readers.

In a lot of ways the ending of a story is almost as important as the start of a story. Anyone who has ever done any kind of creative writing class, or let’s face it, anyone who went to school and had a half decent English teacher, will have heard on many the occasion the importance of having a strong opening line, page, chapter, scene, whatever – something to hook the reader and reel them in. And while the beginning of a story is important to attract your attention initially, the ending is the part that will often stay with you long after you have finished. If the ending is disappointing, it can almost certainly ruin a book, but if the ending is powerful and poignant, it can leave you feeling humbled and inspired, even in cases where the rest of the story was mediocre.

Before I say what I think makes a good ending, I’d like to consider what I think makes a bad one, and I suspect much of this won’t come as a surprise. Firstly, I’m not the biggest fan of a happy ending. I like endings that have some happiness, an ending that perhaps leaves you with hope, or makes you laugh even, but I really don’t like that fairytale “and they lived happily ever after” ending on anything other than fairytales and Disney movies – it works great for children’s literature, but too many times I have read a work of adult fiction and found a very forced, happy ending that doesn’t fit in with the tone of the book. And that’s something else I don’t like in an ending – when you can tell it’s forced, or when it’s obvious the writer suddenly needed to meet a deadline and quickly tied up all the loose ends of the story in this half-arsed manner, which just comes across as lazy, and hardly leaves me wanting to read more of their work. Lastly, I am always disappointed when the ending is predictable. I’m not saying I want the ending to completely bowl me over in surprise, but I shouldn’t be able to guess every little detail of it several hundred pages prior, either. 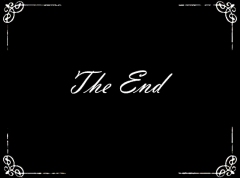 So what do I like in an ending? I like an ending that flows naturally from the story, and that comes to a proper end, one that is realistic and conceivable within its own context and genre. I like an ending that is just lightly surprising, just enough to make you think “oh, that’s clever!” I like an ending that is thought provoking – in fact, I dare say this is one of the most important aspects for me, because I want to come away from a book thinking about and reflecting upon it, and not just thinking “well, another one bites the dust.” And as odd as this might sound, and this is entirely a personal feeling – I prefer a melancholy ending. Not deeply depressing, not “everyone has died, and the community/kingdom/duranduranfanclub* will never recover” type of ending somewhat akin to a Shakespearean tragedy, but something melancholy and sad in atmosphere and tone, something that stays with you and gnaws away gently at your thoughts for a day or two.

What do you think makes a good ending of a story, whether it be a short story, novel, play, or even a film?

Do you prefer happy or sad endings, and if so, do you have a particular reason why?

*No offense to any Duran Duran fans out there. Hungry Like The Wolf was a good song.

35 thoughts on “What do you think makes a good ending?”