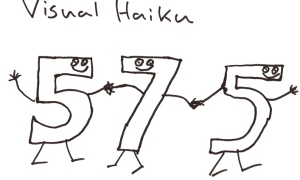 I’ve addressed this issue before, but quite a long time ago now, and I figured that considering it’s National Poetry Month and NaPoWriMo, and as I found myself just recently explaining this to both friends and some of my students, that it would be a good time to mention this again.

You see, a lot of people write what they think is a haiku, except what they are writing is not in fact a haiku. This in itself is a bit of a contentious issue – some believe that they it is not a true haiku unless in Japanese, as that language has features that help the haiku to be appreciated on a greater level than in English. Others also argue about how many syllables are supposed to be in each line, while others again argue that none of this is that important.

But there is one aspect that, to me at least, is quite important – the content. Many people write in the haiku form about people or feelings, and automatically this makes whatever they are writing not a haiku but a senryu – kind of like a sister form, one could say. A haiku needs to reference the season somehow, or at the very least the weather, the atmosphere, and nature – this reference word is called a kigo word. The haiku should contain little to no verbs at all, focusing instead on engaging the senses with a quick snapshot of nature. The senryu instead focuses on human nature, rather than geographical nature, with a lack of kigo word.

Aside from this, the generally accepted rules are much the same – 3 lines, the first line with 5 syllables, the second with 7, and the last with 5 again. Both forms are quite fun, and while the haiku is more popular, a lot of beat poets (such as Ginsberg and Corso) enjoyed the senryu, and more importantly what most people think is a haiku is quite often a senryu.

I’m sure some people will think I have too much time on my hands to worry about such silly, tiny details with these forms, but I can’t help but think that if you’re going to write specific poetic forms, you should take the time to learn about them and write them properly. They are much more enjoyable that way, and you’ll grow more as a poet by making yourself stick to the at times rigid rules that come with some types of poetry. And besides, we only keep these forms alive by practising them, and doing so in the correct manner.

What are your thoughts on these rules of writing a haiku – do you think they are necessary? Were you aware of them previously?