This is another hard one to answer, which sort of makes me think that maybe I’m a bit stubborn if it’s that hard to change my opinion about something. Or maybe I’m just firm in what I think. Oh well. 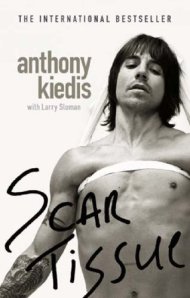 My mind has ended up flittering to biographies, which can often change your mind about a person – you can ending up liking them more or finding them more interesting (because one of these two must be true for you to have read the book in the first place), or you can end up loathing the person, or thinking they’re the dullest person to ever walk the earth. Sadly, when I read Scar Tissue by Anthony Kiedis, I found the latter of these two possibilities happened.

I grew up listening to Red Hot Chili Peppers, the band which Kiedis fronts and sings for and has done for over 30 years now. I remember hearing Under The Bridge as a kid and loving it, even though I had no idea what darker meanings were lurking beneath those lyrics. As a teenager, Californication was one of those albums that was just everywhere you went, for a solid year or two, and even now, 15 years later, that album is still played heavily on the radio around the world. I saw the band perform in 2002, and it was one of my favourite ever concerts and easily my first big stadium concert.

So I was pretty disappointed when I read Kiedis’ autobiography and realised he’s basically a self-indulgent brat. I mean, okay, I understand that a lot of rockstars are this way, and a lot of rockstar biographies read more or less the same, but Kiedis was just horrible to so many people and he doesn’t seem to understand what he did wrong half the time.  About halfway through the book you stop caring that he’s yet again become addicted to drugs for the twenty billionth time, or that another girl has left him because she’s realised she can do better. It’s like through all his experiences he should have learnt a few more lessons than he did, that he should have grown more as a person so he would have something more profound to say about himself. But he didn’t, and he doesn’t.

Funnily enough, not too long after I read this, I lost interest in RHCP a bit. I mean, I still like a lot of their music, but their last couple of albums were lacklustre to say the least. And as for this book, while I’m glad I read it, I don’t intend on reading it again. My mind is definitely made up now.

What’s a book that changed your opinion about something?