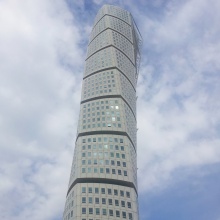 The Turning Torso has become an iconic building in Malmö. Unfortunately, it’s residential and you can’t go inside. It overlooks the sea between Sweden and Denmark.

Finally, here it is – the first part of many based on my recent road trip around Sweden. This first post is about my visit to Malmö, which was actually two days before I left on the official road trip but I’m going to include it anyway because the city was pretty amazing. All the pictures are much bigger than they’ll be on here so click on them if you want to see them full size.

Malmö is Sweden’s third biggest city and is famous for many things: incredible architecture such as The Turning Torso, the epic bridge to Copenhagen over in Denmark (which actually goes underwater at one point), and of course the lovely Skåne accent (Skåne County covers a lot of the south of Sweden and people from other parts of the country mock their accent. Frankly I’m just happy to be in a country with such noticeable differences between accents). 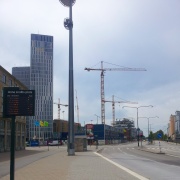 The sight of a changing city.

The first thing I saw, however, was cranes everywhere. Followed immediately by the construction areas those cranes were situated in. The thing is, it seems to me as a total outsider that the city of Malmö is undergoing some dramatic changes all over. There seem to be a lot of areas that I suspect will be apartments, particularly close to the water, so presumably they plan on attracting a lot more people to live there. In particular, I suspect its aiming at young people who would help grow the city in the long term and who would find the proximity to Denmark (and, through that, a lot of the rest of Europe) rather attractive. It will be interesting to see how the city looks in a few years time. 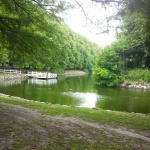 After proceeding to become lost in a city that at first seemed eerily empty, I eventually found my way towards Malmöhus Fortress. Before going to the castle itself, though, I made my way to the huge gardens attached to it – it seems every fairly big city here in Scandinavia with a castle also has some sort of royal garden, which I personally think is really nice. All around 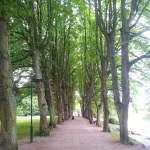 people were lazing on the grass reading, or just hanging out under the shade of some of the huge trees. There is something about being surrounded by so much nature which induces an inescapable calmness and serenity, I think. Or maybe I’m just a hippie born in the wrong era, who knows. But even though I sped around the gardens (I only had a couple of hours to explore the whole city), the place left a mark on me and I definitely want to return with a good book one day and enjoy it more. 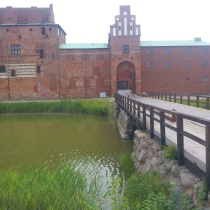 Eventually, I found my way to the castle. After a disappointing lunch at a cafe nearby, with a bonus fly for added flavour, I wandered inside Malmöhus Fortress, curious as to what I would find inside. I had my hopes up – I mean come on, the place has a moat and dates back to the 1400s. It has been turned into a museum and gallery of sorts inside, and at first I was a bit disappointed to say the least (the first room I walked into was a slightly random exhibition on frogs…I mean, I like frogs, but really? Frogs?). But I pushed on, determined to get deeper into the castle and to discover some history about the place. Eventually I found what I was looking for – an awesome museum on the history, the battles the fortress had seen, and frankly a total information overload on it all. When this place was built, it was in fact part of Denmark along with a lot of the southwest of current Sweden (including my home up in Halmstad). But in 1658, the Swedish successfully captured a lot of this land and then spent the next few decades fending off repeated Danish attacks as the Danes attempted to recapture their lost land. The fighting stretched up the West Coast of Sweden all the way past where I live now (a couple of major battles were in Halmstad), but the bulk of the fighting seems to have been in Malmö, in which this fortress was hugely important. I couldn’t help but think about how many stories there are in all of this, waiting to be written down in one way or another. 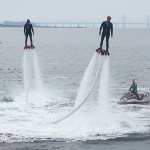 After the relief of finding some fascinating history in the walls of the castle, I decided to head towards the waterfront of the city that stares out at Denmark and the bridge that now connects the two countries. I walked past the Turning Torso (the picture at the start of this post), past a bunch of restaurants I wish I had have known about an hour or so earlier when I ate lunch, and found myself drawn immediately to a growing crowd on the water’s edge. As I 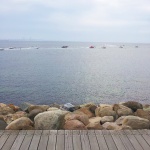 approached, I saw a man float up into the air. As I got even closer I realised he had one of those awesome water jet-packs on and he was quickly joined by another one as the two of them floated around much to the delight of the crowd. I have no idea if this is a regular occurrence or just a couple of show offs, but it was fun all the same and extra nice with the bridge in the background. I then walked along the waterfront and watched as a party of boats in a small enclosed dock suddenly all shot off across the water – I can only assume heading to Denmark. 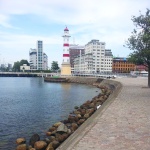 On my way back to the main town of Malmö (which oddly I had avoided until the end), I accidentally went the right way and discovered all the things I didn’t see when I first got there. I saw a mini lighthouse by a small bridge that appeared to be a replica of the big bridge to Denmark. Actually, 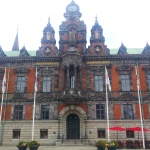 on the same note, I saw a lot of bridges in general – there’s canals all over the city and literally dozens of small bridges, many of them just pedestrian bridges but still with 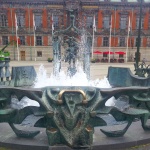 awesome architecture. The main part of town here definitely seems to be the old part of town, with many of the buildings looking quite gothic in architecture as well as other features like a cool looking water fountain in the centre. It is interesting though – the fact that the bigger buildings are so old suggests that this city has always been big (which history also suggests). In other Swedish cities and towns the old part of town is full of much smaller, less dramatic buildings and often more nature. Still beautiful in their own way, but you can see how some places have grown extensively from much smaller towns but other cities have always been bigger. 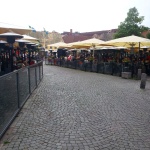 To finish off my day in Malmö I found the pub scene in Lilla Torg (which translates as Little Square I’m pretty sure) and had a beer or two on my own before meeting up with a bunch of friends and family for dinner out. The beers were great, the dinner was…well, the food was nice when it eventually came out. So I guess overall I didn’t have the best 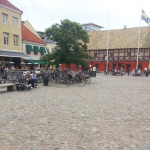 experiences with eating in the city, but otherwise it swept me off my feet a little actually. I can’t wait to go back and explore all the hidden corners of it that I am yet to discover. If you’re ever in Sweden don’t limit yourself to Stockholm and the eastern coast as so many travellers do – come to the West Coast and explore places like Malmö as well. You won’t regret it!