I know I only just recently wrote posts about teapots and coffeemugs, but this was just too awesome to not show you all. An amazing friend of mine bought this for my birthday last month, and I must say it is one of the most awesome presents I have ever received. 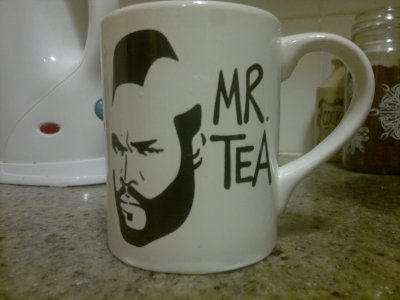 I pity the fool…that doesn’t have this mug.

The mug is handmade out of earthenware clay by Lorrie Veasey in her New Jersey Studio, and for some reason I like the fact that it isn’t a mass-produced item. She designs other similar items at her website Our Name Is Mud which is worth checking out.

Anyway, I just thought this was too cool not to show everyone. We now return you to regular programming (in other words, my next post will actually be about a book (also, I have been considering writing semi-regular posts about music because, well, I like music…thoughts? I am thinking maybe an expansion upon my music listening page, but I haven’t fully decided yet…anyway thoughts on this would be greatly appreciated. Oh, this isn’t the brief aside I intended it to be, is it?)).

When I say “close friends”, I am not referring to actual people, but am in fact talking about mugs. Why? Because let’s face it, if you’re going to be a writer, you probably need to take up coffee drinking at some point (or at the very least, tea drinking), and even if you don’t write but enjoy reading, you’ll probably know nothing beats the feeling of sitting down with a good book and a cuppa.

However, the purpose of this post isn’t to discuss any deep and profound philosophies of drinking coffee, but rather to show you some photos of some of my favourite mugs from which I drink this life-saving liquid. It has occurred to me recently that I collect mugs (it takes me a while to realise I’ve started collecting something else, as I tend to collect collections of things), and this revelation was mostly caused due to a distinct lack of space in my kitchen cupboards. At any rate, I won’t show you all of them, but just a few of my favourites (and I’ll explain along the way why I like them so much).

Enjoy! And maybe make a cuppa for yourself while you’re at it… 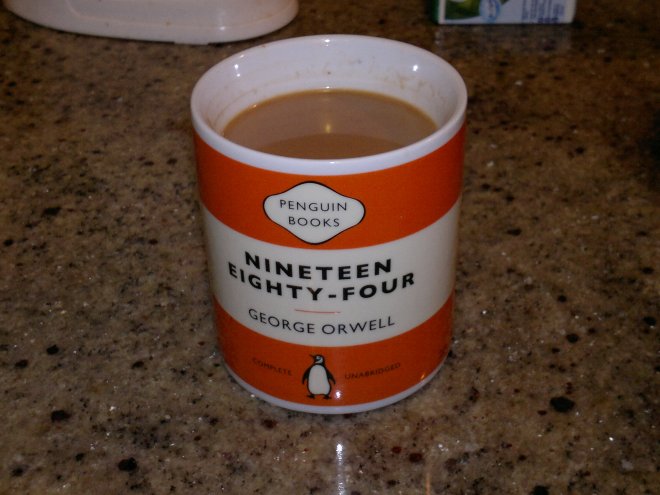 A mug of George Orwell’s classic Nineteen Eighty-Four. Readers who have followed my blog since the early days (i.e. January, February), will remember I also have a similar one of F. Scott Fitzgerald’s The Great Gatsby. 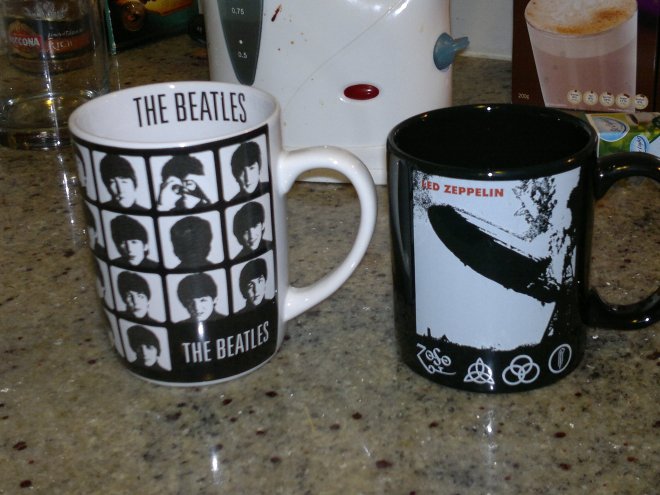 On the left, a mug of The Beatles, with the pattern from the album A Hard Day’s Night. On the right, a mug of Led Zeppelin, featuring the cover of their first, self-titled album (the back of the album cover is on the other side of the mug), along with the four symbols along the bottom that featured on later albums. Both of these bands share the prestigious position of being my favourite band. 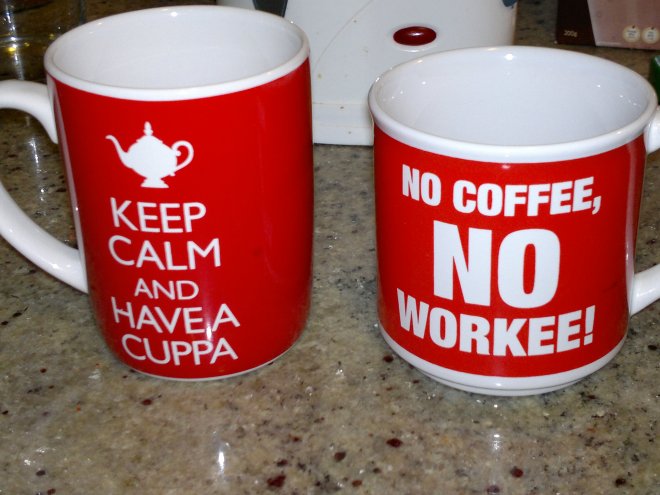 On the left: “Keep Calm And Have A Cuppa”. On the right: “No coffee, no workee!” Two good philosophies to live by, I think. Yes I have used the mug on the right at work before, just for a bit of fun. 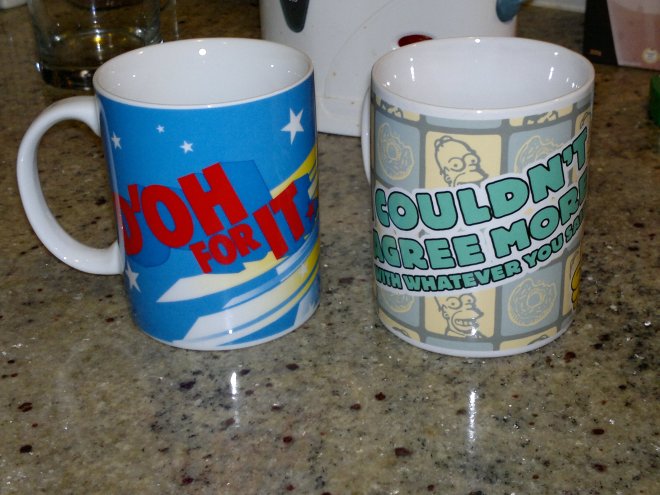 On the left: “D’oh for it” with a picture on the back of Homer running. On the right: “I couldn’t agree more with whatever you said!” also with a picture of Homer. What can I say – I like The Simpsons. Always have, too. 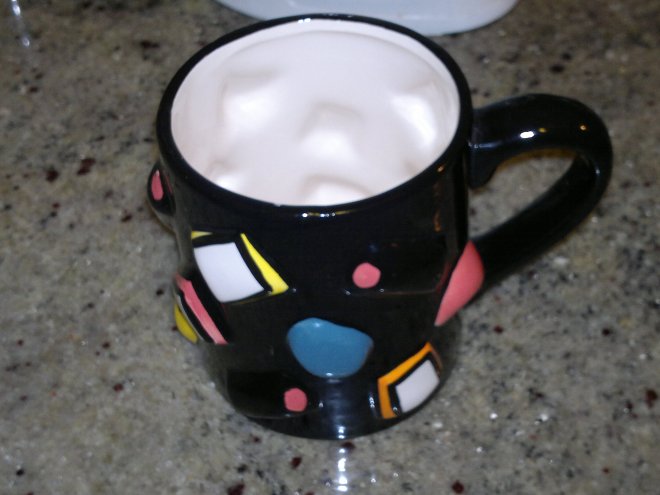 Yes, this is a mug shaped to have bits of liquorice allsorts decorating the outside and sticking out. This photo doesn’t show it, but this mug is actually enormous, so I tend to use it for hot chocolate mostly.

“The morning cup of coffee has an exhilaration about it which the cheering influence of the afternoon or evening cup of tea cannot be expected to reproduce.” – Oliver Wendell Holmes, Sr.

“As soon as coffee is in your stomach, there is a general commotion. Ideas begin to move…similes arise, the paper is covered. Coffee is your ally and writing ceases to be a struggle.” – Honore de Balzac (1799-1859)

“Coffee makes us severe, and grave, and philosophical.” – Jonathan Swift

“Sleep is a symptom of caffeine deprivation.” – Author Unknown

“Deja Brew: The feeling that you’ve had this coffee before.” – Author Unknown

Are you a coffee or a tea drinker? Do you depend on it for reading/writing, or is it just a nice way to relax?

So, as you may have guessed from the general theme of my blogs, I like books. So I thought I’d post a few quick pictures up of my book nerdiness, just because I can, and because I like to share this kind of thing with fellow book nerds and bookworms! 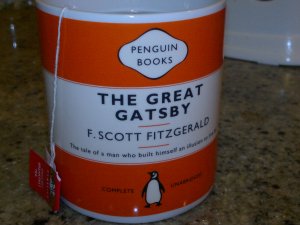 This is my awesome mug based on the Popular Penguin edition of The Great Gatsby, one of my favourite classic novels. I was using this at the school I teach at quite a lot towards the end of last year. 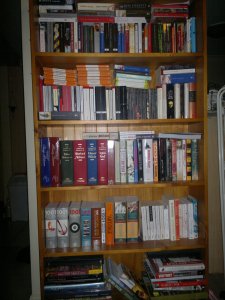 This is one of my bookshelves. As you can see, quite a lot of classic books and anthologies reside on this bookshelf. I’ll award super smartie points to anybody who can actually tell what these books are without zooming in (and more so if you happen to own them). Towards the bottom of the bookshelf are my collection of books on neurology, and a number of books on history, music and other things. 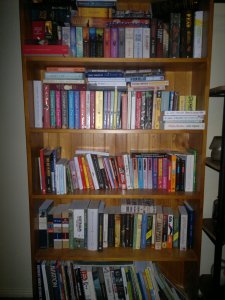 This is my other main bookshelf. This one tends to hold more modern literature. The fantasy books are on the top shelf, comedy is mostly in the middle shelf, history on the second bottom shelf. Again, points to whoever recognises any of these books as being in their own collections!

I have more books and more nerdy bookish things than this, but many of them are away in boxes somewhere. I will dig them out one day soon.